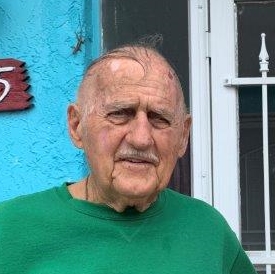 Alexander P. Lapacz, 87, Holiday, Florida, passed away on May 4, 2022 with his wife, Nida, by his side.  Al was born on July 11, 1934 on the family farm in South Chase, Wisconsin, to Joseph and Rose (Krawczyk) Lapacz.  His family later moved to Green Bay, Wisconsin, where he attended St. Mary’s of the Angels Grade School and East High School.  Al enlisted in the U. S. Navy, then served in the U.S. Air Force for four years, and later joined the U.S. Coast Guard, from which he retired after 20 years of service.  While in the Coast Guard, Al was stationed all over the world and told many interesting stories about his adventures.

Alex became pen pals with Leonida Viscayno Gorrero (“Nida”) through one of his Coast Guard workmates.  Eventually, they both flew to Hawaii to meet in person.  Al and Nida were married on June 17, 1972 at St. Theresa Church in Kauai, HI.

Al was a wanderer! It may have been a result of being transferred so often while in the service, but after being discharged, it seemed that Al couldn’t permanently put down roots.  He’d buy a house and a few years later feel the need to move; buy a house and move.  He and Nida finally settled in Holiday (twice) where they lived for many years.

Al was a man of many talents.  First and foremost, he was a musician.  Al played the concertina and keyboard very well and had several of his songs recorded.  His love of polka music inspired him to play his concertina or keyboard at family gatherings, local retirement and nursing homes, or for anyone who would listen.  He loved an audience!  Al and Nida relished listening and dancing to polka music and attended “Polka Days” in Pulaski, Wisconsin many times.  In addition, Al wrote an interesting novel and had it published.

Alex was the comedian of the family.  He loved to make people laugh.  Al was always telling jokes, and he was famous for repeating his favorites over and over (which could be a bit annoying).  His nieces and nephews called him “Uncle Al, the Kiddies’ Pal!”  Al was instrumental in organizing the Lapacz Family Reunions that were held regularly at Bay Shore Park, and he treasured the time he spent with family members.

Some of Al and Nida’s favorite times were spent at the beach, especially having lunch there with relatives and friends.  In addition, Al was very proud of his yard and the landscaping he did.  His lawn was impeccable, and he and Nida tended several beautiful flower gardens.  Al spent many hours tinkering in his garage, using his mechanical skills to work on small engines and repair other motorized items.  Going out to eat was something Al and Nida truly enjoyed.  It didn’t matter if it was breakfast, lunch or dinner, Al and Nida absolutely loved going out to eat.

Al’s faith was very important to him.  He was a longtime member of St. Vincent de Paul Church and served as Lector for several years.

Al is survived by his wife of 49 years, Nida; his sister, Clara Mleziva, Denmark, WI; his sister-in law, Janie Lapacz, Mountain, WI; and his sisters-in-law, Zosima (Suze) Reponte, Kauai, HI and Antonia Mees, Phillipines.  He is further survived by numerous nieces and nephews.

A special thank you to Al’s friend, Edward Grimes, for his friendship and support, especially the past few years.  As Al’s health declined, Ed became Al and Nida’s chauffeur, and Ed’s compassion is greatly appreciated.

Michels & Lundquist Funeral Home of New Port Richey is assisting the family.  Burial will be in Florida National Cemetery in Bushnell, Florida.