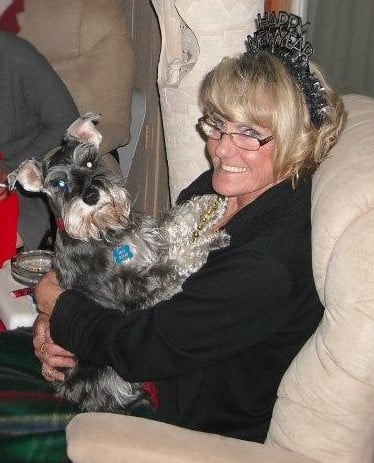 Sligar, Darlene Marie, 72, of New Port Richey, passed away peacefully on June 24, 2016. Darlene was born in Alderson, West Virginia on December 31, 1943 to the late, Dell and Annabelle Cobaugh. Darlene worked as a collections agent for the Credit Bureau. Darlene was predeceased by her loving husband, Guy Sligar and daughter, Darla McKee. She is survived by her daughters, Roxanne James, Shauna Knerr, and Lynnette “Little” Byrne; sister, Marti Smith; her “furry child”, Fritz; and a very large loving family full of grandchildren, great-grandchildren, and great-great-grandchildren. The family please ask memorial donations be made to Gulfside Hospice and Pasco Palliative Care.
Growing up as “Army Brats” in a military family, Darlene and her sister Marti traveled the country living in base housing for most of their younger years. Once their father retired the family finally settled down in San Diego, CA where they started a new life in a “real” home with dancing lessons, piano and horseback riding. Darlene was a natural dancer with music in her veins, so when the girls began performing for the USO in San Diego and even had a spot on television it was no surprise! During Junior High the family moved to a ranch in Susanville where Darlene had a horse of her own to love, along with “bummer lambs”, rabbits and chickens. After their father passed away the girls moved to Carson City, NV where Darlene continued her affinity for horses by joining the Equestrian Academy and rode in numerous parades and rodeos. Darlene married and moved to Idaho where she raised three of her four daughters with her love for horses and animals on their farm. As the girls grew older the family moved to Spokane, WA and Darlene began a new career at the Credit Bureau which would last for over 20 years. Darlene began teaching line dancing and her daughters Darla, Shauna and “Little” soon were helping out as they all shared the joy of dancing together. Once her daughters grew up and began to marry and give her grandchildren, Darlene began a new life with “her Guy”, a caring and giving man who became the love of her life. Together they traveled and played together, sharing a beautiful relationship filled with love, laughter, friends and family. Upon Guy’s passing Darlene moved to New Port Richey, FL to be near daughter Shauna as her health began failing. Never one to slow down or give up anything she loved, Darlene became a favorite in the local 1st Down Sports Bar as the most vocal and die-hard Dallas Cowboys fan around. Together with Shauna and her sweetheart Marc, Darlene also never missed a Wednesday Night Trivia match at the pub and played Bunco with a fun group of ladies every month. Spirited and full of life, she was happy to engage in friendly competition and enjoy her “wine and ice” among her newfound Florida friends. Now as we say goodbye to a free-spirited and beautiful soul, Darlene joins her beloved Guy and daughter Darla along with many loved ones awaiting her joyous arrival. She left us too soon but with hearts full of love and memories to cherish.