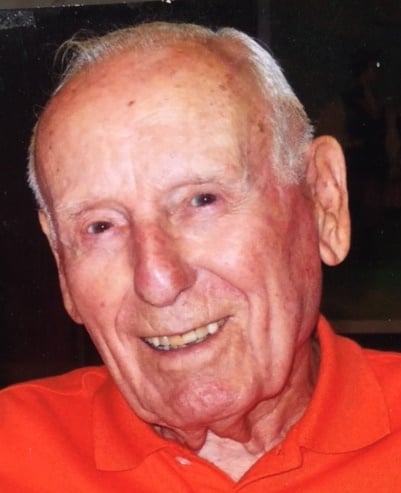 As a young man, Ed was quite the athlete participating in various bowling leagues and tournaments. He also enjoyed playing baseball and was a valued pitcher for his team. To earn money, he did some caddying as a young man at a local golf course. His love for these sports continued later in life after returning from the war. He began to play golf, joined work/Army bowling teams/leagues and got to see ‘The Babe’ play as well as other legendary players. After moving to Florida, he began his love affair with the Tampa Bay Rays and would attend several games throughout the year including celebrating his 95th birthday seeing birthday wishes for him on the big board near the famous stingray tank.

Ed was a WWII Army veteran achieving the rank of corporal and serving as a Medical Technician. After the war, he married the late Hedwig ‘Hattie’ Juckniewicz in September 1948.  Ed worked at Sunoco for 7-8 years. Afterwards, Ed began his job at Western Electric as a welder in the Machine Shop in Kearny, NJ for 23 years before retiring in August 1980. Some of the organizations to which Ed was an active member were: Polish Legions of American Veterans (PLAV), Pulaski Club of Holiday, Knights of Columbus, #5869 – New Port Richey, Holiday Telephone Pioneers, ARC Pasco County Senior Golf, and Moose Golf.

Ed is survived by his children: 3 children: Carolyn and husband John, Edward A., Barbara and husband, Bob, as well as 5 grandsons: Daniel, Michael and Christopher Stallone; Michael and Steven Friedman, and his dear ‘lady’ friend, Betty.

He is preceded in death by: his father and mother, Anthony & Josephine (Baranowski) Tomczyk: his sister, Jean Homicki, his first wife, Hedwig ‘Hattie’ Juckniewicz, his second wife, Jean Hartman, and his goddaughter, Dolores Donnelly and a nephew Edward Homicki.

Visitation will be held on Nov 3 from 2-6 pm at Michels & Lundquist Funeral Home, 5228 Trouble Creek Road, New Port Richey. A funeral mass will be celebrated on Nov 4 at 11 am at Our Lady Queen of Peace RC Church. Interment will follow at Meadowlawn Memorial Gardens. In lieu of flowers, the family respectfully requests that donations be sent to: The Arc Nature Coast, 5283 Neff Lake Road, Brooksville, FL 34601 or Suncoast Hospice Foundation, 5771 Roosevelt Blvd, Clearwater, FL 33760.