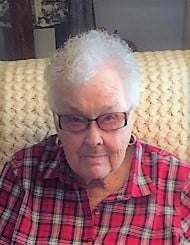 King, Harriet J, 96, of Holiday, passed away peacefully on February 8, 2017. Harriet was born on December 12, 1920 in Elmira, New York. She was the daughter of the late, Miles and Janette Hillman. Harriet relocated to Florida in 1969, coming from her homtown of Elmira, New York. In her spare time, she enjoyed reading, going shopping, and spending time with her family and friends. She is remembered as having a great sense of humor and just being an all around great person, including being a great mother, grandmother and friend.