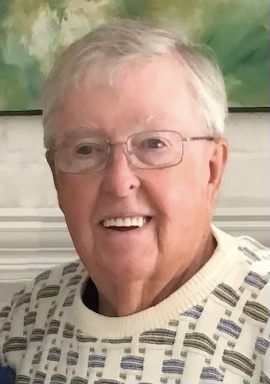 He spent his career working as a Credit Manager in the Manufacturing Industry. He was a long-time and active volunteer for the Boy Scouts of America in Illinois and Florida. He served
in leadership positions at the district and council level and attended many training programs offered to BSA volunteers. Jim was recognized for his volunteerism with the Silver Beaver, a
council-level distinguished service award, the Bronze Pelican and St. George emblem for spiritual development of Catholic youth in BSA. Jim was a member of the Order of the Arrow
and earned the Wood Badge, the highest level of adult Scout leader training. After retirement, he had the opportunity to work at Philmont Boy Scout Ranch in Cimarron, NM. Jim was a
member and chancellor of the Father Farrell Council 6476 and purser of the Father Farrell Assembly 1774 Knights of Columbus. Until his recent illness, he volunteered weekly at
Suncoast Hospice Care Center.

A funeral mass will be held at St. Vincent de Paul Catholic Church in Holiday, FL. on Friday, October 21 at 10:00 a.m. A memorial service and interment of cremains is planned in Illinois at a later date. A memorial has been established to Suncoast Hospice Care Center.