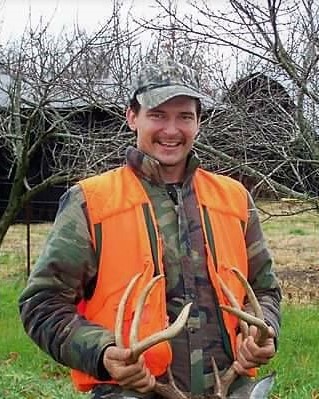 Jessanuel David Schwendeman, 35, of Port Richey, passed away suddenly December 7, 2017.  Jesse was born on September 13, 1982 to David and Darla Schwendeman at Community Hospital in New Port Richey.  He remained a resident of the area his whole life, marrying his beloved wife and starting his own family here.  He attended First Assembly of God in New Port Richey for many years.  He also owned his business in the area doing landscaping, handiwork, and any other trade he could do to help his clients.  If he didn’t know how to do what they asked, he would find a way to get the job accomplished.  He was resourceful and creative.

Jesse loved being outdoors.  Hiking, camping, hunting, anything that got him outside he enjoyed.  He built a zip line in his backyard for his children.  He found so many interesting ways to modify the line to make it more fun, including the use of a rocking horse.  Jesse was a big kid at heart.  If there were children around you knew he’d be joining in on their games in no time.  He had such a love for life and always found ways to fit in fun.

Jesse’s friends were so very important to him.  Thursdays were game nights.  Whether it was bowling, shooting pool, or any other activity he could share with his chosen family, it didn’t matter, so long as they could spend time together making happy memories.

Jesse is survived by his devoted wife of 14 years, Kristen; his sweet children, Daisy and Hunter; his loving parents, David and Darla; his brother, Christopher (Jillian); his sister, Stacey; Matthew, Harley, and Robert whom he was guardian to; and countless dear friends.

Visitation for Jesse will be held on Saturday, December 16, 2017 from 10am to 12pm at Michels & Lundquist Funeral Home.  A funeral service is to follow at 12pm.  In lieu of flowers, please consider making a donation to the GoFundMe page that has been created to aid Jesse’s family through this loss: https://www.gofundme.com/jesses-dream-fund

Jesse was a generous, funny, and caring soul.  His absence will be deeply felt by all who enjoyed the privilege of his company.