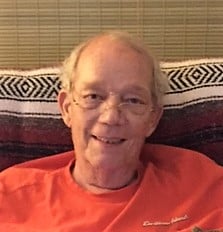 Hess, Kenneth Benjamin, 69, of New Port Richey, passed away peacefully at his home on March 19, 2017. Kenneth was born on Apil 6, 1947 in Cumberland, Maryland. He was the son of the late, Benjamin and Alverna Hess. Kenneth courageously served in the United States Navy during the Vietnam War. He later went on the work for AM Tote International as a system operator. He was very dedicated to his job and would work for the company for more than thirty years.

Kenneth relocated to Florida over twenty years ago, coming from California. He is described as having a great sense of humor and being able to make anyone laugh once he got to know them. He was also an avid Golden State Warriors and Oakland Raiders fan.

Kenneth is survived by his loving daughter and her significant other, Tobi Hess (Komar Chan); sisters, Doris (Richard) Towers and Joy Forrester; and good friend, John Vacha. The family please asks for donations to be made in his honor to Hernando-Pasco Hospice, which took great care of him in his last days.