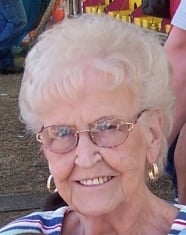 Mary Louise Barksdale, 88, of New Port Richey, passed peacefully away at 12:18 pm on May 7th, 2014, surrounded by her loving family. Mary was born on April 18, 1926 in Monongah, WV, to the late Rohl N. and Jennie V. Dillow. Her family moved to Philadelphia, PA in 1940 and it was there that she graduated from Simon Gratz High School and met her husband, the late Andrew J. “Andy” Barksdale, Jr. Mary and Andy were married on May 23, 1947 at Lehigh Baptist Church in Philadelphia. They relocated to St. Petersburg in 1951 after Andy secured a position with the Atlantic Coastline Railroad. They moved to New Port Richey in 1981. Mary worked for over 60 years as a full charge bookkeeper. She “retired” three times, but always found her way back to the profession she loved. She left her final position in 2006, at the age of 80. She was a devoted mother, grandmother and great-grandmother and could often be heard bragging about how proud she was of her family. Mary was a member of Hope United Methodist Church in Trinity, where she was active in several women’s Bible study groups and volunteered for Vacation Bible School and the annual Experience Bethlehem. She was also a life member of Electa Chapter #18, Order of the Eastern Star, where she served two terms as Worthy Matron, over 15 years as her chapter’s Secretary and one term as District Grand Instructor. In addition to her loving parents and devoted husband, Mary was preceded in death by her brothers Robert Dillow and Richard Dillow, her sisters, Sara Lee Brown, Eugenia Hamlin, Betty Byrne and Jeanette Wright and her daughter-in-law, Linda Dubler. She is survived by her son, Wayne Barksdale of Atlanta, GA; her daughters, Karen Farris and Nancy Frazier of New Port Richey; her grandchildren, Bryan Farris of Tampa, Steven Farris, Nicole Misemer and Mary Ann McCarthy, all of New Port Richey and Sam Barksdale of Atlanta, GA; her great-grandchildren, Jillian, Andrew and Max Misemer and Joey McCarthy, all of New Port Richey; her brother, Roger Dillow of Bensalem, PA; sisters, Helen Morrison of St. Petersburg, Lois Ritchey of Warminster, PA and Nancy Moore of St. Petersburg and over 100 nieces & nephews, great nieces & nephews and great-great-nieces and nephews. Family and friends are invited to pay their respects at Michels & Lundquist Funeral Home on Monday, May 12, 2014. Visitation will be from 10 a.m. – 12 p.m. with an Eastern Star Service at 11:30 a.m. Funeral Service at 12 p.m. officiated by Pastor Kelly Smith. Graveside service and interment immediately following at Sylvan Abbey Memorial Park in Clearwater, where she will be laid to rest with her dear husband, Andy.