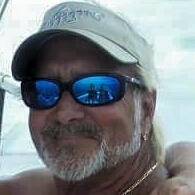 Michael “Captain Mike” Keilman, age 70, of New Port Richey, passed away December 9th, 2016, under the care of HPH Hospice. He was born January 31, 1946 to Raymond Keilman and Mary Kemper in Chicago, IL. Mike came to Florida in 2000 after retiring from Baxter Healthcare. He worked as a manufacturing manager for them for 33 years.
Captain Mike gained his nickname through his favorite pastime. He was an avid fisherman. He enjoyed all kinds of fishing, but especially deep sea fishing in a few select secret spots in the Gulf. When not fishing, he also enjoyed woodworking and travelling. He got to experience many foreign lands. Japan was his favorite destination, though Australia was a close second.
Mike lived a full, good life teeming with laughter and happiness. You’d often hear him say, “It’s five o’clock somewhere!” He was fun loving, warm hearted, and strong willed. He touched many peoples’ lives and everyone who met him loved him.
Mike is survived by his loving wife of 25 years, Carolyn; son, Clinton Keilman; daughter, Kelly King; step-daughter, Nina Stymacks-Giuliani (Tony); and grandchildren: Katelyn King, Haylee Myers, and Anikah Giuliani.
A celebration of Mike’s life will be announced later. In lieu of flowers, please consider a donation to the Pace Center for Girls in Mike’s name.  http://www.pacecenter.org/support/donate