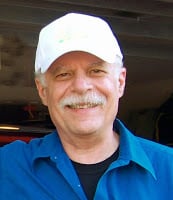 Nicola “Nick” Cuti has died. Cuti was an artist and comic book writer-editor, science-fiction novelist. He was best known as co-creators of E-Man and Michael Mauser (with artist Joe Staton) and Moonchild, Captain Cosmos, and Starflake the Cosmic Sprite. He has also worked as an animation background designer, magazine illustrator and screenwriter. Films produced and written by Cuti include Grub, Shock House, Tagged!, The Lady Without Substance and Moonie and the Spider Queen. Cuti has written and illustrated the novels Moonie and the Spider Queen (2009), Moonie in the Slave Market of Opuul (2010) Moonie in Too Many Moons (2010) and “Moonie Moonie Goes to War”. Cuti was twice awarded Warren’s Ray Bradbury Award for writing. In 2009, Cuti was awarded the Inkpot Award for career achievement. He was a fixture for many years at the San Diego Comic-Con, Fetish Con and Spooky Empire cons. Cuti was also a talented amateur magician and guest at the Magic Castle in Los Angeles, California. His heroes were Ray Bradbury, Wallace “Woody” Wood, Albert Einstein, Rod Serling and Stephen Hawking. An avid reader, “The Time Machine” was among his favorite novels. The series “Tom Corbett, Space Cadet” inspired his career. Cuti, a strong supporter of space exploration, was a veteran of the U.S. Air Force, where he was stationed in Nice, France; Turkey; and Bangor, Maine. Nick was a loyal and devoted father, son, brother and friend. He is survived by his daughter Jaymee Cuti of Oregon, brother Emil Cuti of Florida, Great-Aunt Lee of Florida and many cousins. He will be dearly missed by friends and colleagues throughout his career and lifetime. Nicola Cuti, Oct. 29, 1944 – Feb. 21, 2020.