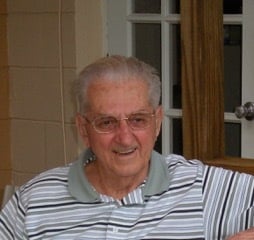 Roland R. Girouard ?husband, father and grandfather?died on Friday, March 27, 2015 in New Port Richey, Florida, after a long illness. He was 86.
Roland was born in Nashua, NH on January 24, 1929 to Joseph and RoseAnn Girouard. He lived in his family home until going into the Army, where he was stationed in Germany, and was an avid skier. Roland returned from the Army and met and married his wife Simone Lachance in 1955. He worked and raised his family in Nashua. He retired in 1992 and moved to Florida in 2005 where he enjoyed the rest of his retirement years.
Roland spent his life devoted to his family. He is survived by his wife Simone, his two children and their families – his son, Peter Girouard and life partner Barry Crites – and his daughter Diane Waldron and her husband Matt. He is pre-deceased by his daughter Lynette Girouard. He was very attached to his much loved grandson Chad, his wife Trisha and great grandchildren Erin and Alexis. He is also survived by his sister Georgette McDermott, sister-in-law Fleurette Lavoie and brother-in-law Robert Lachance, as well as many nieces and nephews.
Roland raised his family as a Civil Engineer and draftsman. His favorite things included spending time with family – he and his family spent many years camping, and he loved to play cards. He was a wonderful handyman and spent a lot of time fixing and building.
Roland will be remembered for his constant generosity, helpfulness and love for his family.
In honor of Roland, please make donations to the Alzheimer?s Assocation at: www.alz.org/donate